The Jewellery Quarter’s 117-year-old Chamberlain Clock will be removed this month for extensive repairs and restoration.

Birmingham, UK, 3rd August 2020 – On the 22nd August 2020, the process will begin to dismantle and remove the Chamberlain Clock from its current home on the roundabout junction of Warstone Lane and Vyse Street in the Jewellery Quarter, for clock-makers Smith of Derby to begin the extensive restoration project. Following the refurbishment, it is expected the Clock will be reinstated in early 2021, complete with a new information panel. 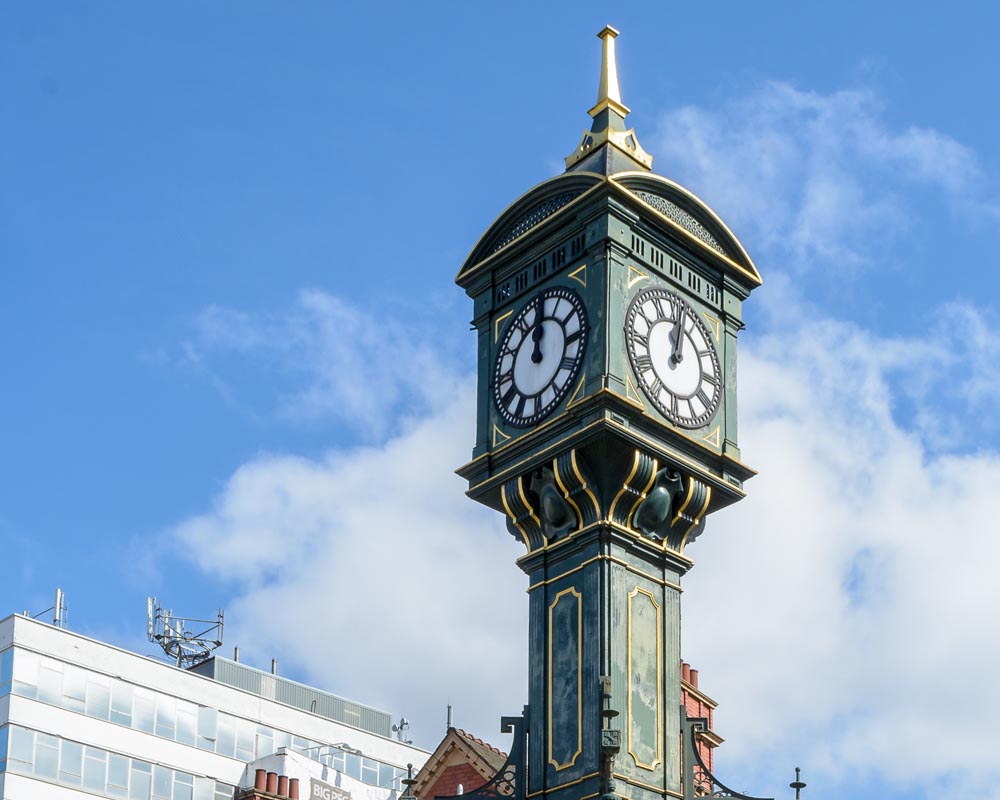 In its current form, the Clock stands with significantly corroded paintwork and a broken timepiece. The cast-iron feature, which was last restored 30 years ago, will now undergo extensive operations to restore its internal workings, its clock face, and tower. While other exciting plans involve repainting the Clock, reinstating its bell, and cleaning the structure to its former glory.

With over 160 years’ experience of the restoration of clocks and cast-iron structures, Smith of Derby are the team behind the refurbishment – which will be conducted at their unique clockwork facility. The team will remove the structure, restore it to its former glory, and reinstate the timepiece for the enjoyment of generations to come.

Chamberlain is hailed for being largely responsible for the fast-paced modernisation of the city whilst Mayor of Birmingham between 1873 – 76. Many locations and landmarks in the city are dedicated to him, including the Jewellery Quarter’s Chamberlain Clock. First unveiled in 1903, the Clock commemorates Chamberlain’s visit to South Africa. Chamberlain’s role as Colonial Secretary and his involvement in the British Empire is not as widely discussed, so as part of the project, the JQTH project will be recruiting a researcher with support from the Beatfreeks-led project ‘Don’t Settle’. The young person will carry out research and consult with the local community about Chamberlain. The research will inform a new heritage information panel, which will be installed near the site when the Clock is reinstated.

The research builds upon discussions that were hosted at a JQTH event last year, titled: ‘Joseph Chamberlain – personal, political, colonial‘ as part of the 2019 Jewellery Quarter Festival.

Thomas Wildish, Chair of the JQDT says: “The Chamberlain Clock has stood tall as a Birmingham landmark since 1903. The JQBID made a pledge to levy payers in 2017 to refurbish the Clock and it’s crucial that promise is delivered. The project has been made possible through the generous contribution of our business community through JQBID, as well as the funding provided by the JQTH, through the National Lottery Heritage Fund. As part of the refurbishment, it’s crucial we acknowledge the history of the Clock. Joseph Chamberlain is well known for his positive impact on the city, yet more needs to be explored about his role in Government and the British Empire. It’s for this reason we’ll be installing a new information panel, to share his history further with current and future generations.”

For the safe removal of the Clock, the traffic roundabout will be closed on Saturday 22nd and Sunday 23rd August, meaning that traffic diversions will be in place and bus stops along the route will be suspended. Affected routes include all roads leading up the Clock, including Frederick Street, Vyse Street and Warstone Lane with clear diversions in place. For full details about the road closures and further information on the project, visit jewelleryquarter.net/chamberlain-clock/