Two Jewellery Quarter breweries have teamed up together to form their own beer!

Burning Soul Brewery, based on Mott Street, and Rock and Roll Brewhouse, based on Hall Street have created a brand new beer. We invited the guys at Burning Soul to tell us more about the collaboration and what customers can expect when tasting ‘Rock & Soul’!

We (Burning Soul) and Rock and Roll Brewhouse have been good friends and Jewellery Quarter neighbours for years, you’d often find us enjoying a beer at each other’s taprooms prior to the disruption caused by COVID-19 last year. But at least thanks to the disruption we both started looking at ways to sell beer that could be enjoyed at home, so we knew it would be a great time to work together on a beer. In the true spirit of collaboration we wanted to produce something that captured a little bit of both our usual style of beer.

The recipe was made over a few (or many) excellent beers with Lynn (Rock and Roll Brewhouse) where we discussed the ins and outs of the recipe. Whilst Rock and Roll will use hops from all over the world, us (over at Burning Soul) tend to mostly use American hops.

This is a fun bit of beer history as American beer started life as an imitation of great British ales but were often looked down upon for having fruity “off flavours” caused by the different growing conditions for the hops. Now UK breweries import a huge amount of American hops to get that bold fruity hop flavour into our beer. However fortunately, excellent UK Hop growers like Charles Faram have reacted to this and started growing and breeding UK hops to produce those big bold flavours we’re often chasing. So we are imitating an imitation – which of course is the highest form of flattery.

Going back to the beer, we decided on doing a brew that celebrates our favourite UK grown hops, we nominated Harlequin, which is one of the newest UK hop releases that packs a bold resinous punch that almost has a lycee character about it. Rock and Roll nominated Bramling Cross which is known to impart a spicy blackberry taste. Interestedly, Bramling Cross is an old school hop which at one point started to fall out of favour because of its American hop profile (great!).

For the design of the can we really leaned into the psychedelic, Jimi Hendrix flower power look Rock and Roll often use on their pump clips and around their taproom. The can was originally just the bright floral pattern fully coloured and upon sharing it we joked that it was definitely more Rock than Soul, as we tend to keep our cans monochromatic with a high contrast black and white look. Following the joke we removed all the colour, which resulted in a label looking like it was taken from a low age group colouring book. This led to us trying to blend the two approaches which became the final design. However if you look at the back of the can you’ll see the design in its full colour glory. 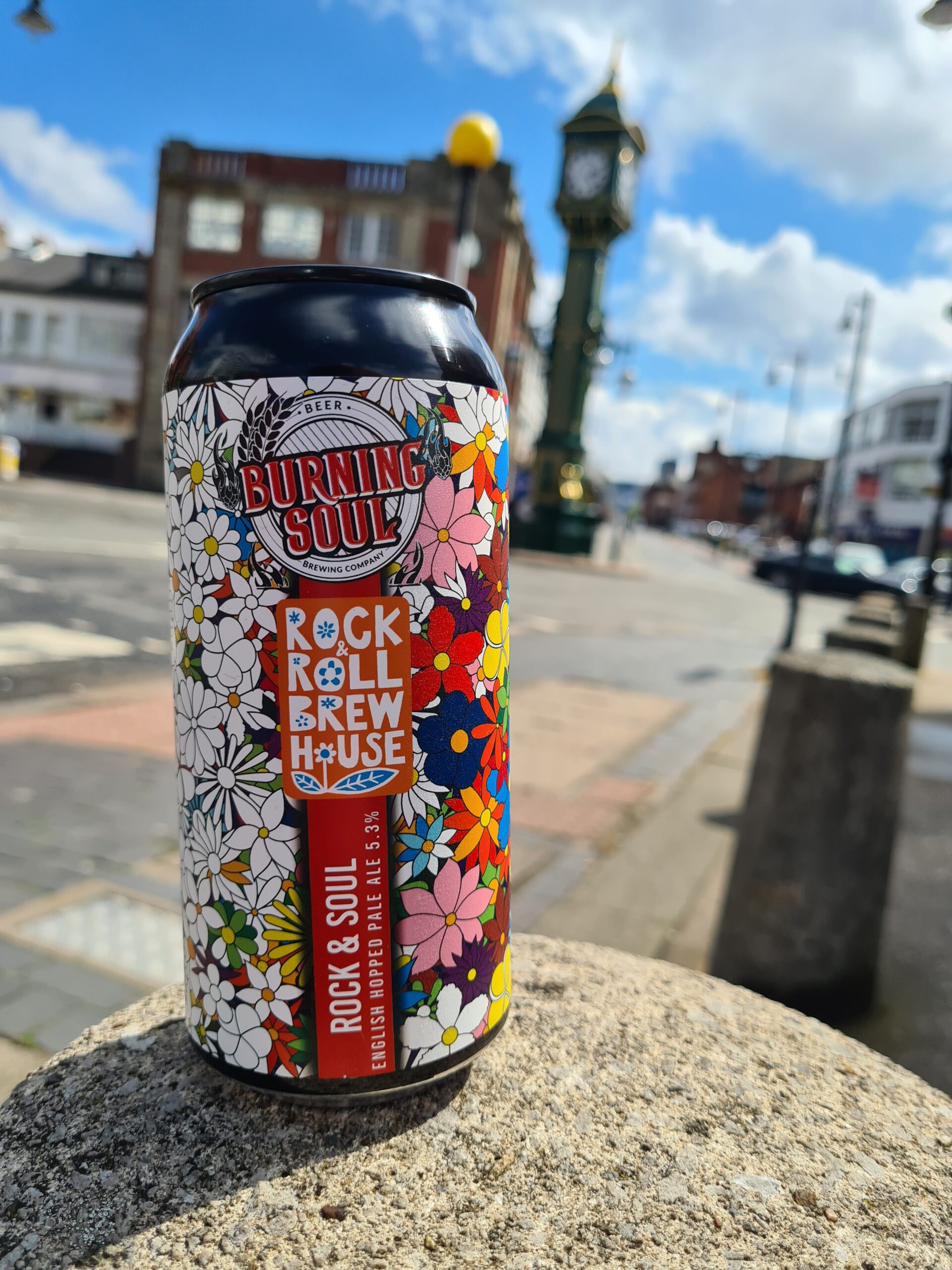 Everyone at both Rock and Roll and Burning Soul are really pleased with how the brew turned out. We created a really enjoyable clean golden hoppy ale that has a unique floral taste that we’re sure will be enjoyed by everyone -while stocks last!

Cans are available for local delivery at www.burningsoulbrewshop.co.uk and for collection at both Rock and Roll Taproom and Burning Soul on Friday and Saturdays.