Made in the Jewellery Quarter: Birmingham 2022 unveils medals for the Commonwealth Games

Medals for the Birmingham 2022 Commonwealth Games have been revealed for the first time. Designed locally by students from the School of Jewellery and manufactured by Jewellery Quarter based Toye, Kenning and Spencer. 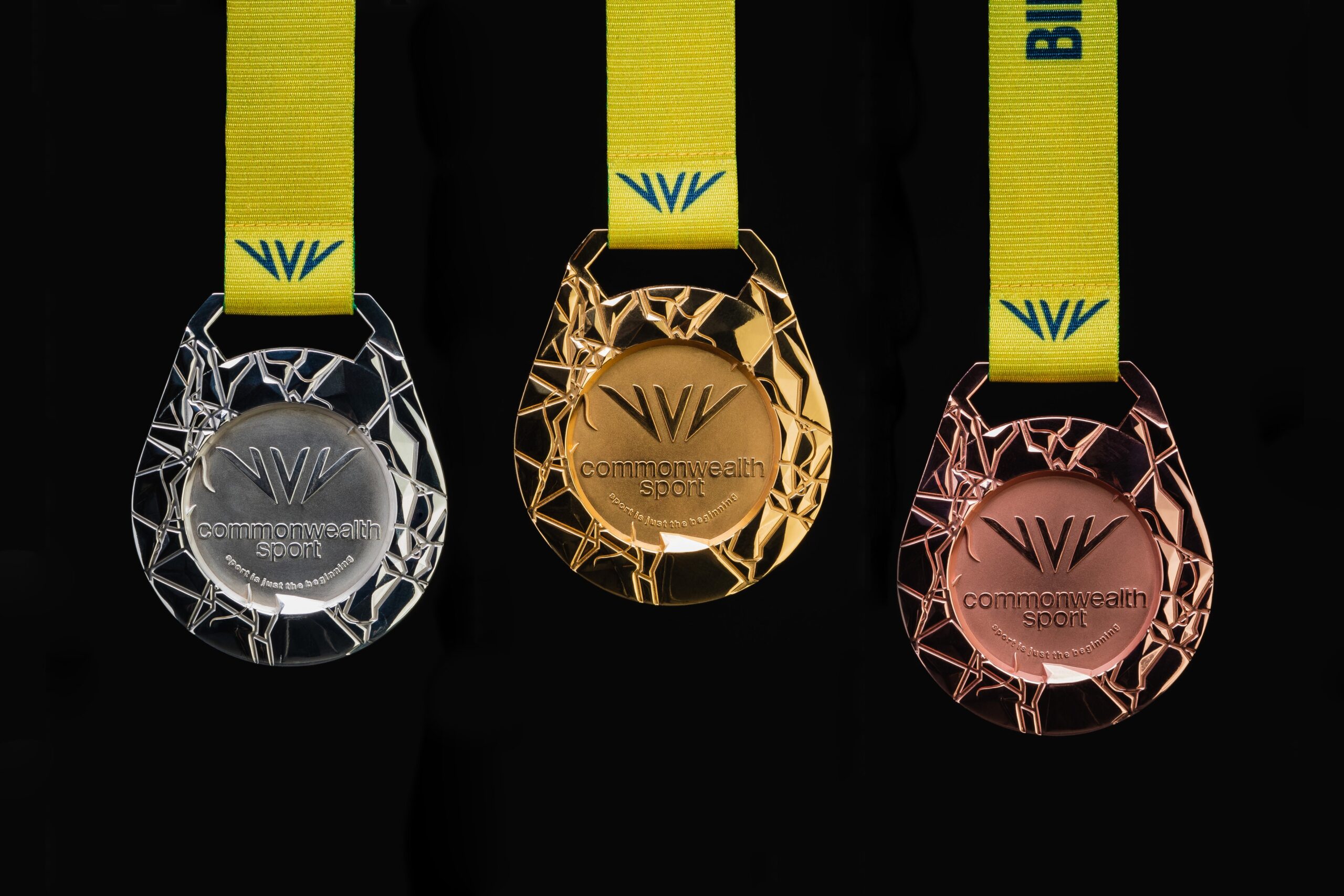 Birmingham 2022 has unveiled the official medals which will be awarded to athletes at the Commonwealth Games this summer. The exquisite, jewel-like medals have been designed by three students from Birmingham’s School of Jewellery.

The designers took inspiration from the journey that athletes take to reach their goal of competing at the Games, and so embossed areas, symbolising an aerial map of the host region’s road and canal network, have been included as a key feature of the design.

The medals are being manufactured by Toye, Kenning and Spencer in Birmingham’s world-renowned Jewellery Quarter, a location which is included on the Birmingham 2022 marathon route and is just a stone’s throw away from Arena Birmingham, one of the key venues for the Games which will begin on 28 July. 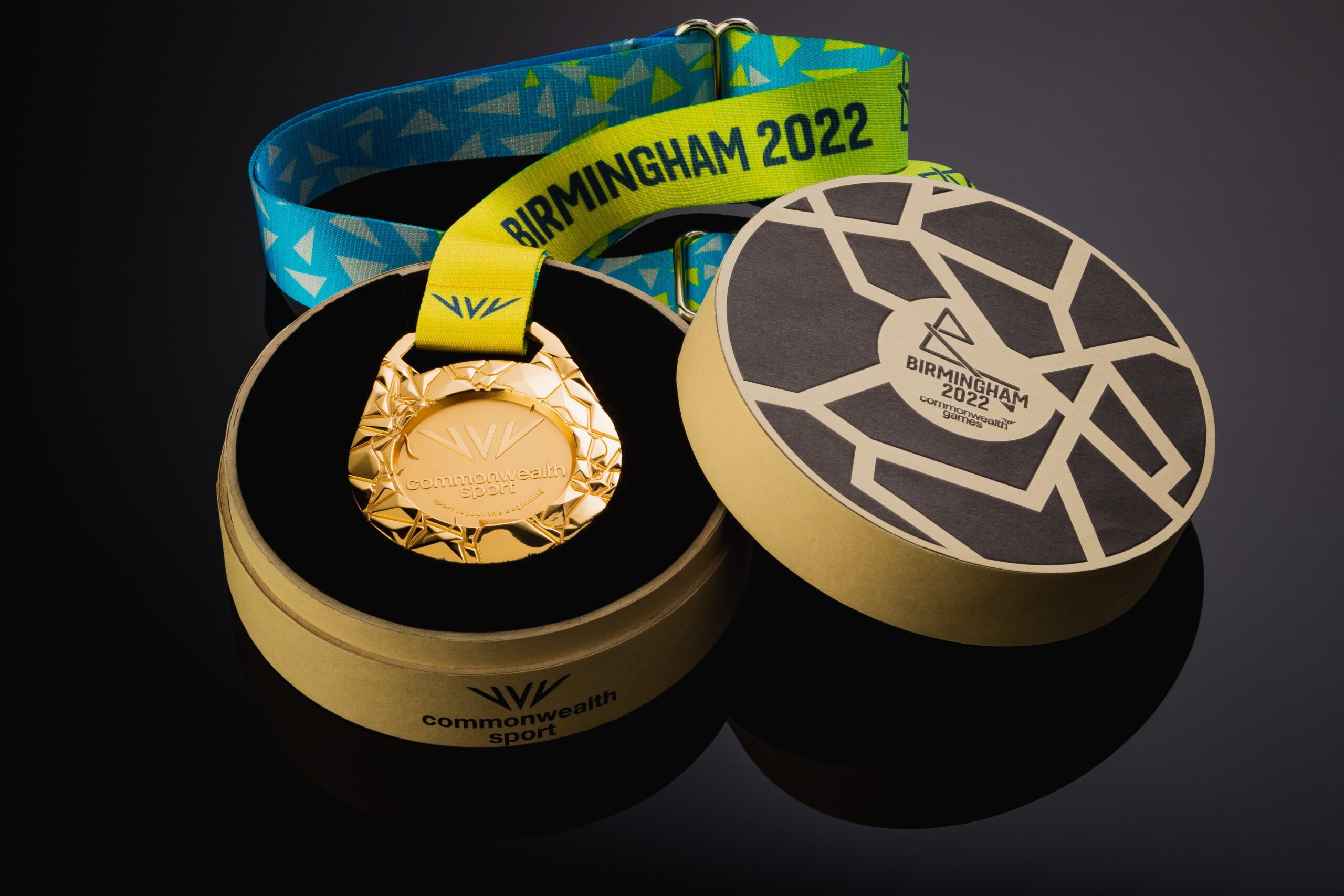 They have been designed by students from the School of Jewellery, based in the Jewellery Quarter

The medal was designed by a group of students led by Amber Alys, with Francesca Wilcox and Catarina Rodrigues Caeiro also part of the winning team that has designed the ribbon and the box for the medal too.

The three students, along with dozens of others, individually entered a competition organised by the School of Jewellery and the Birmingham 2022 team, and as they moved through the judging process, they were brought together as a team.

The medal and ribbon have been designed with all athletes competing in the 19 sports and eight Para sports in mind. The medal has been created so that is it textured and has a tactile quality, so all athletes, and especially those with a visual impairment, can feel the design. The ribbon attached to the medal is also adjustable, so that it sits comfortably when worn, no matter the height of the athlete or Para athlete wearing it.

Amber Alys, the lead designer for the medal, spoke on behalf of the design team and said:

It has been incredible to see our designs come to life, and we’re delighted with the medals, ribbons and presentation boxes.

We really thought about the athletes when designing the medals – the connection between athletes and the journey they go on to achieve their dream of standing on top of the podium.

We wanted to create something with a jewel-like quality so that the athletes had something that they could treasure for the rest of their lives. We really hope the athletes like them.

One of the athletes hoping to get her hands on a medal is seven-time Paralympic gold medallist, Hannah Cockcroft, as a Commonwealth Games medal is one that is missing from her extensive collection. Hannah Cockroft said:

Since I have been an international athlete, my events have not been included in the Commonwealth Games, so I have never been able to compete for Team England before. From the minute I found out that the 100m for T33/34 athletes was included on the athletics programme, I have been thrilled that I finally have a chance to add a Commonwealth Games medal to my collection.

Now that I have seen how beautiful the medals are, I’m even more focused on winning one this summer.

As well as honing the students design skills, the competition has given them a chance to learn how the industry works and has also helped them to understand more about the manufacturing process and how an initial design is brought to life.

The designs that all of the students submitted were judged by a panel of experts including Para sprinter and Athletes’ Advisory Committee member, Katrina Hart, Councillor Jayne Francis, Birmingham City Council’s Cabinet Member for Education, Skills and Culture, Delvene Cockatoo-Collins, who designed the Gold Coast 2018 medals, and Dame Louise Martin, President of the CGF. Dame Louise said:

These stunning medals will be the ultimate prize for every athlete competing at the Birmingham 2022 Commonwealth Games. I would like to congratulate Amber, Francesca and Catarina, the three talented students from Birmingham’s School of Jewellery, for winning the competition to design the medals and creating an iconic prize for our athletes. Manufactured in Birmingham’s world-renowned Jewellery Quarter, these medals represent the very best of the city, the country and the Commonwealth.

Toye, Kenning and Spencer, a family-owned Jewellery Quarter business that has been based in Birmingham for more than 200 years, has been chosen as the medal fabricators. The company is also making the adjustable gold, green and blue medal ribbons, which feature a celebratory confetti pattern, in their Bedworth factory.

Helping Amber, Catarina and Francesca bring their designs to life has been such a rewarding experience for us. They are very different to other medals as they are not a traditional shape so that was challenging for us, but I think together we have created something which is truly special.

This is the prize that athletes from across the Commonwealth are training so hard to win. Manufactured in Birmingham’s iconic Jewellery Quarter the medals demonstrate the design talent we are blessed with in the UK and will be a lasting symbol of what I know will be an incredible eleven days of sport.

The medals, ribbons and boxes are absolutely stunning, and we would like to congratulate Amber, Catarina and Francesca for creating such a fantastic collection of items.

We would also like to thank all of the students from the School of Jewellery who took part in this competition. Their enthusiasm and passion were wonderful to see, and the quality of designs made it extremely difficult for our panel of judges to choose a winner.

These medals are a statement and a showcase for the skills, creativity and heritage of our Proud Host City. They will be a bold and enduring symbol of our Games for those who earn the right to wear them.

I congratulate everyone who has played a part in their production – and I cannot wait to see them being presented at the medal ceremonies this summer.

1875 medals will now be produced, to be awarded to the athletes placing first, second and third in the 283 medal events that are part of the Games, including more medal events for women than men for the first time ever.

The medal winners will also be given a box in which to keep the medal, and this features the aerial map design too, providing a clear connection to the design of the medal.

The medals will be presented at the victory ceremonies at all 15 of the Birmingham 2022 official competition venues, so ticket holders will see medal ceremonies as part of some of the 286 sessions of sports on offer at the Games.