A new project will take rail passengers through musical heritage in Birmingham thanks to funding from West Midlands Railway.

The project will see 30 themed maps positioned within the railway stations throughout the city and will tell the musical heritage of each area. Artists included and celebrated by the project are Ozzy Osbourne and Black Sabbath, The Beat, Joan Armatrading, Andy Hamilton, and Jamelia, alongside many more.

The project also celebrates iconic venues such as the Que Club and Rum Runner.

The idea was created by Birmingham Music Archive and the project funded by West Midlands Railway’s Your Community, Your Fund community grant. 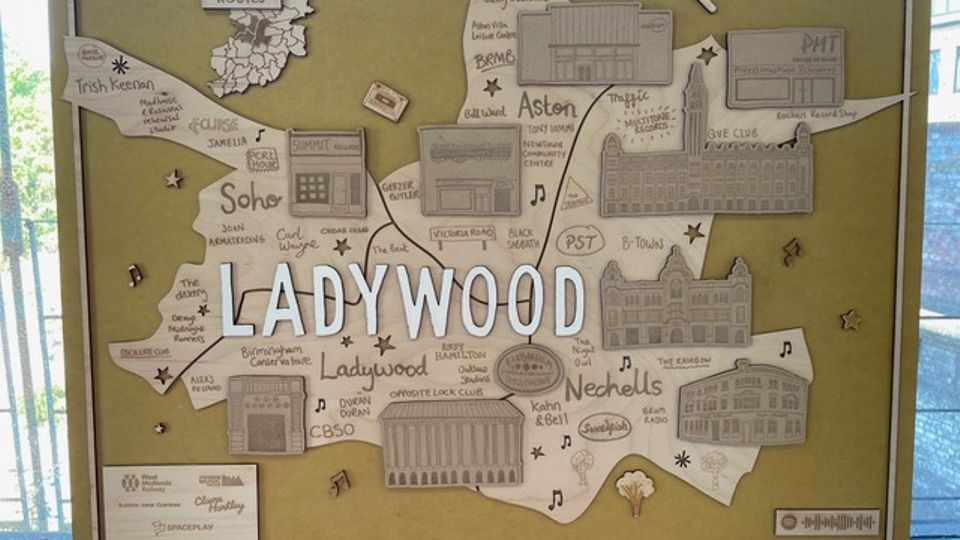 The Ladywood station map to be fitted inside Jewellery Quarter station

The Music Maps will be in place by the end of October and passengers will be able to enjoy learning about the musical stars born in the city and the venues which they played at.

It is hoped that the project will bring pride to the local communities around the stations taking part, bringing an awareness of the musical heritage that has grown through the years in Birmingham.

The maps were created and made by local designers and studios SpacePlay and will also have Spotify codes which will connect the relevant music for passengers to enjoy and adding to the experience bringing the history of music to life.

More information about the project is available here: www.21stories.co.uk

“I’m passionate about Birmingham’s music history, heritage and culture and as a city we need to celebrate and publicise these stories of global interest. This project with the railways will allow us to reach hundreds of thousands of people each year, as they travel across the train network. It’s a fantastic opportunity to highlight, through truly beautiful locally-produced maps, some of Birmingham’s great musicians and venues.”

“I want more people to know more about Birmingham and its contribution to local, national and international music history, heritage and culture. We have an incredibly diverse city and our music reflects the diversity of our communities but many of those people don’t get the recognition they should.”

“The Customer & Communities Fund was designed to bring life to community projects that would benefit our customers and we are so pleased to see this world-class concept delivered in Birmingham.

“Many local people and global visitors will be unaware of the musical talent that impacted world music from Birmingham and the Midlands. This talent should be celebrated, and we are proud to have been part of this project to bring Birmingham’s musical heritage to life at our stations.”

Brilliant ide……#Birmingham #Music #Heritage is often underrepresented …Who knew that #Dexy’s came from @WeA.reBearwood and that #ELO & @JeffLynne came from @ShardEnd and #ShardFest tries to keep that #Legacy alive…..Early 1960’s #Band #,TheMove similarly came from East Birmingham with @ShardEnd and#TikeCross again prominent with @RoyWood the prime mover behind #The Move and #Wizzard with their iconic #Christmas hit #IwishitcioukdbeChristmasEveryDay …..#BrumisBrill